A bit of research fell into the email inbox this morning that’s worth airing. On the back of an earlier article about trying to maximise the impressions of a print ad it was interesting that this research looked at the channels used in the marketing mix and how those channels are tracked.  The research was conducted by SkyIQ , part of BSB Sky.

Of the 12 channels used, the most predominantly used channel was online being employed by 76% of the marketers surveyed. In my own opinion that figure struck me as being on the low side. Given that the survey had canvassed

I thought that online/digital would have been used by the majority, if not certainly the vast majority of all the companies.

Some of the ‘traditional’ media were next in line with print being used by 71% of respondents, email by 66% and, greeted with a broad smile from An Post, direct mail came in at a healthy 61% usage. TV was last only employed as a marketing channel by 36% of the respondents along with mobile also on 36%.

You could get the impression that some channels were not employed for the sake of a “safer option”. Given that we have a 117% penetration of mobile phones in the Republic the figure of 36% usage in the marketing mix strikes me as particularly conservative.

Or is if the decision was to either spend, say €50k, on a new mobile platform or three full pages in the Sunday Indo would some individuals take the road most travelled. The old 60’s adage of ‘you won’t get fired for buying an IBM’ springs to mind.

On average, companies used six marketing channels and half the respondents said that they used seven or more. Now using a channel is one thing but tracking it and being able to, in some concrete way, show that channels influence on sales is quite a different matter. Some of the channels simply don’t that the technological slant to be able to track their ROI. Take for example the 7th channel on the list above -PR. How can you categorically say that a photo shoot, taken up by the national press, was worth X in terms of sales not publicity, which is a different animal, but sales  – I’d suggest you’d find it very difficult.

The survey then probed the actual tracking of the various channels. The main reason cited for tracking these channels was to justify the spend of the marketing department – which seemed a little self-serving.

Ninety percent of those surveyed track at least one channel they use. The average number of channels tracked is four and, given that the average employed was six, there are two channels on average left untracked.

Sales derived from online were tracked by 73% of companies meaning that 27% of companies did not track sales from the online channel. Given that the technology is freely available, easily implemented and easily used, this was a low figure. 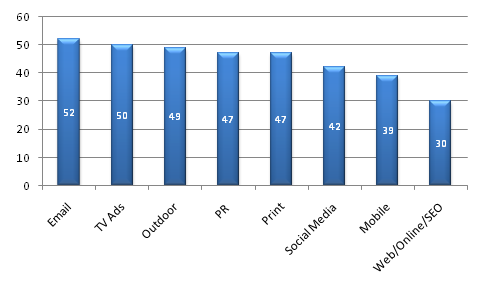 Another reason mentioned as to why tracking was difficult was “Not knowing which channel the customer has been most strongly influenced by”. If you have six channels and a customer is exposed to, say, four that you know of, which one do you chalk up for the sale?

Their conclusions were correct: it’s going to get more complex, so not is the time to embrace the challenge of multiple platforms.

The full details of the survey are here