While the underlying figure (816,000) is still higher than previous surveys (changes in sample size etc have had a effect on these numbers) the listening reach and, more so, it’s recent direction should be of some concern. 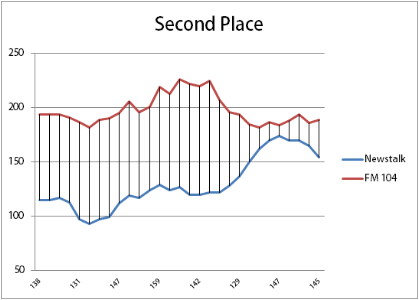 Again, like in the national picture, one of the standouts is the performance of 2FM. Over the year it has lost 24% of its listenership in the capital or 18,000 listeners, 7,000 of which abandoned the station in the last quarter. It’s not alone in this listenership flight. Today FM lost 20,000 in the year and 6,000 from Q2. Newstalk lost 16,000 over the twelve months and Q102 dropped 11,000 but the latter two managing to hold their own on the last book.

Dublin radio listenership is under pressure whether it’s down to apathy on the part of the listening public or competition from other sources. Without sounding Dublin centric the capital does play an important part in the radio picture. It may be no coincidence that all of the top ten programmes in the national listenership ‘chart’ have a disproportionately higher draw from the metropolis than average listenership. I’m not saying that it’s the panacea for ailing programme slots or indeed a Willy Wonka type Golden ticket (look what happened most of those winners!) – but, in order to score high on the national stage you have to do it better in the capital.

This time out I’ve compiled a top twenty programmes in Dublin across the week. There’s no point in slavishly going through each item as you can draw your own conclusions. Just a few notables: This Week dropping 28,000 on the book, Claire Byrne shedding 12,000 and Miriam O’Callaghan dropping 10,000. You might think that this would be counterbalanced by some big gains, but the largest is Strawberry Alarm adding 4,000.

I can’t take the applause for this as “Expunge” in the boards.ie brought this to my attention. Much to the shock of some of the country folk, the recent results have only confirmed what the city slickers have known for some time. They are not uncultured ‘tall and are, in fact, highly sophisticated and embrace d’arts: