It’s very much depends on what you analyse for the 2016Q1 results. Look at the numbers year on year you get one answer, look at them book on book you get another! In as many places as possible I’ll throw in both so you can draw your own conclusions.

However in a few cases either analysis still yields the same woeful outcome.

In terms of overall listenership radio reaches 83% of the population or 2,989,000 people every day. It’s down marginally on 2015Q1 and down a little less on the previous book.

Still the dominant player is RTE1 reaching a quarter of the population on an average day or 891,000 listeners. That’s up 6% on the year but down 1% on the last book. They are still comfortably 476,000 listeners ahead of their nearest rival Today FM. That station dropped 13% or 66,000 of its listenership base over the last twelve months and jettisoned 22,000 or 5% in the last quarter. At this point, the last four surveys have seen them chalk up successive losses.

Behind them is Newstalk who overtook 2FM a few surveys back to give them the bragging rights of third spot. Only that Newstalk also turned in falling listenership numbers in this survey they would be very close to claiming second spot. Newstalk dropped back 4% or 17,000 listeners book on book accounting for most of the 25,000 drop over the past twelve months.

It’s worth highlighting the fortunes of both Newstalk and Today over the past few years. Looking at the graphic below, Today have been on a slow decline a for a number of years. Newstalk made great strides from 2013 but look now that they have run out of steam. And there are only problems down the tracks. Ivan Yates is departing the breakfast slot and Hooks’ reign is coming to an end. So plenty to occupy the teams in both stations.

Lyric was the only station to record an increase on the last quarter and the year. The recent musical chairs at 2FM looks as if it isn’t getting the desired results. They are down a further 5% book on book and 11% on the year or 43,000 listeners. Individual programmes are not performing with Breakfast dropping 10% book on book and Nicky Byrne falling by 9%.

In terms of optics 2FM are perilously close to sinking into single figure reach and may well go into that parish in 16Q2. Across the day they have seen poor returns and the schedule that took so long to craft is patently not pulling in the listeners

A very quick look below at the more closely fought time slots across RTE1, Today and Newstalk.

The Market shares show a decent rise of 2.4% points over the twelve months for RTE1 and falls of over 1% point for both Today FM and 2FM.

The quarter hour picture looks the same most years, but here it is anyway. 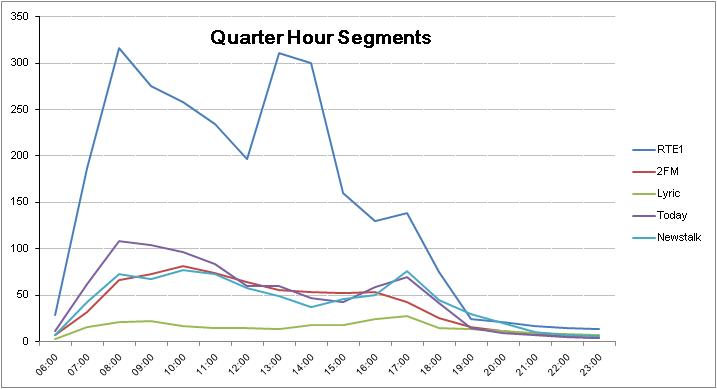