Dublin radio reach is slightly below the national figure at 81% and represents 829,000 adults per day. The trend in Dublin was not so healthy and back at the start of 2014 where the reach was only 78%. So there’s been somewhat of a mini resurgence in listenership over the last few books as it clawed back to 81%.

Following them is Newstalk at 170,000. Their good fortunes have slowed in the last few books and they were at one point only 10,000 off the second Dublin slot only two surveys back. This has now drifted put to a 24,000 gap with FM104 in this book. They added 8,000 in the capital on the year but didn’t see any takers at all book on book remaining at their previous figure of 170,000. You can see their individual programmes and Dublin listenership in the table below.

Making good gains in this book are Sunshine and Nova – 19,000 and 10,000 gains respectively. The fortunes of 2FM are not as bountiful. Despite the musical chairs and an emphasis on Dublin presenters of late, it hasn’t yielded much by the way of Dublin traffic. The station only managed to secure an extra 1,000 listeners in the capital over the past year and even managed to drop of 2,000 listeners book on book. It currently has the lowest proportion of Dublin listeners of all the national stations, standing at 19%, and this is probably what drove the station thinking to a more Dublin centric format over the last twelve months.

There’s mixed fortunes for the other stations which you can see in the tables/graphs below (all tables with yellow headings are sortable).

*Nova’s franchise is the Dublin Commuter where it reaches 88,000 listeners a day up 23% on the previous year.

The shares are self explanatory:

Finally a look at what the capital tunes into – weekday only. Below are the top thirty most listened to programmes with a comparison on the previous book and the previous year. The first six slots are taken up by RTE1and they have eight of the top thirty. Newstalk have five. FM104 and Spin have four slots, 98FM have three and Q102 and Today FM have two. 2FM has one, as does Nova.

An interesting figure falls out of the table below. The top five Dublin weekday programmes are the same as the national preference, but just not in the same order.

Whereas Dublin listenership would constitute 28% of the total radio audience, the top five national programmes rely heavily on the Dublin audience – or, to put it another way, attract a disproportionate audience from the capital. 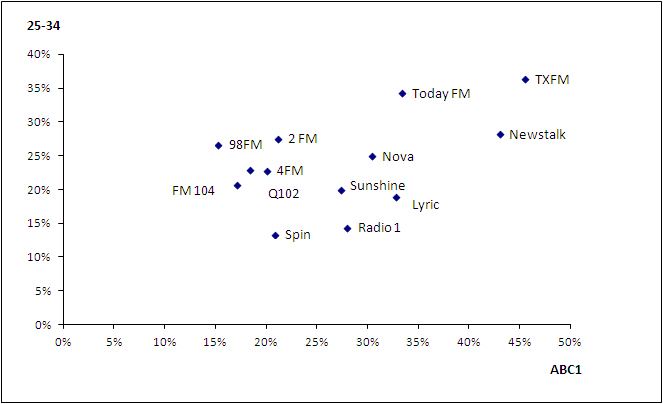