Looking that the national picture and how the individual stations have done, it shows that all of the stations in the survey have lost listeners in comparison to last year. The Donnybrook stable, which has the most to lose in the first place, have had the sharpest declines. RTE1 falling 34,000, 2FM dropped 30,000 listeners or 7% and Lyric, which was the worst performing station on the national stage, dropped 16,000 or 12%.

As an individual station, RTE1 still retains the top slot reaching 24% or 863,000 people every day, but you have to take notice that 44% or 1.5m people prefer to listen to their ‘home local’ stations during the day. I suppose it a bit like the Google mantra – it all about local. 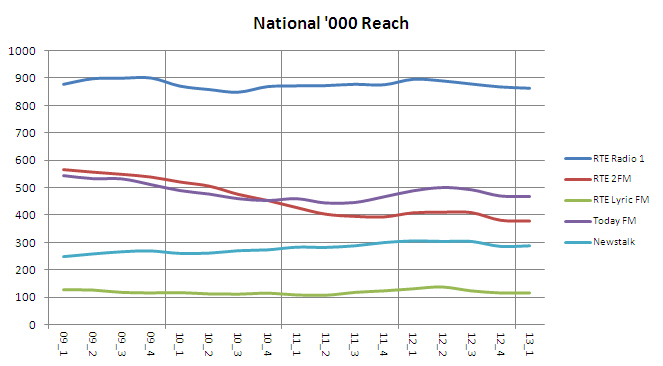 Nationally Today FM retains second slot at 13% or 468,000 listeners without very much competition for the place. It’s followed by 2FM at 11% or 379,000 people and then Newstalk at 8% or 287,000. In terms of trying to say something positive about 2FM, it has managed to slow, if not arrest, its recent listenership declines. Granted, on a full twelve month comparison it has dropped 30,000, but compared to its figure in the last quarter (to December 2012) it’s only down 3,000 listeners. 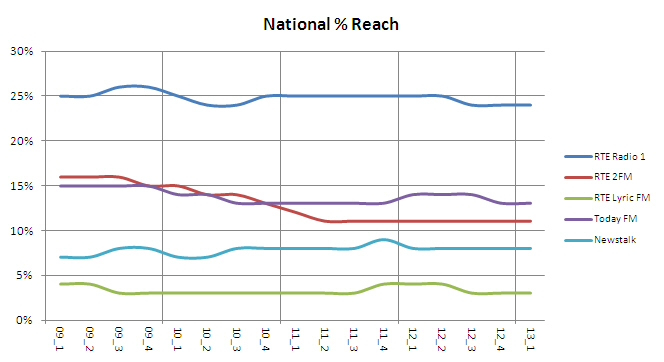 The listenership shares manage to say relatively stable on a quarter by quarter comparison the only major fallers were Today FM and 2FM.

I took the liberty (below) of looking at the national stations on an hour by hour basis, but having to split the graph into day parts to that it’s somewhat readable.

The most noticeable feature is the stranglehold RTE1 has over the majority of the day. Spiking firstly with Morning Ireland and then again with Joe Duffy.

I overlapped one hour in the second and last graphs so the both have figures for 18:00 – just to highlight the sudden drop in listenership after 6:00pm. RTE1, overall, would win that period of the day, but they are given a run from seven-o-clock with Newstalk’s ‘Off the Ball’.

Just on that: the figures in the survey are the average listenership for the twelve months up to and including March 2013. The ‘Off the Ball’ team resigned in early March and therefore their absence is only surveyed for the final three weeks of this 52 week survey.