If the national picture is more or less static, then at least the Dublin figures adds a tinge of excitement into the mix. With thirteen stations vying for position, the competition is fairly intense. Like the national figures it’s dominated by RTE1 with a 28% reach, but that top slot is, every quarter, being chipped away at by FM104, who now stand at a 24% reach in the City.

Whereas some years back the fight (light weights at the time) was between FM014, 98FM, Q102 and Spin with RTE1 looking on. FM104 now look like they have pulled away from that scrap as they look to take on the current title holder RTE1. Year on year FM014 and Spin have made the gains of 30k and 20k respectively. Newstalk added 10k and 98FM and Q102 lost 15k and 19k. Today FM did gain listenership nationally – but it wasn’t in the metropolis where they lost 8,000 further widening their capital/outside the capital gap. The rest of the Dublin stations figures were single digit gains or losses.

Looking at the same market over the past four years, it paints a different picture. 2FM are still what can only be described as haemorrhaging listeners in the Pale, down 46,000. Also, looking like A&E candidate as well is 98FM having dropped 31,000 listeners (21%) in the same four year period.  FM104 made most of its gains in the last year having been relatively stationary in the three preceding years. Nova dropped back 6k to 45k so it will be interesting to see how they feed that into the spin mackine for their (nearly) obligatory full page advert ion one of the nationals. Phantom looks at this point to be seriously struggling at 15k. FM104 are only four points away from RTE1 now, or 59,000 listeners, and have put eleven percentage points of daylight between themselves and their nearest four years back – 98FM. It’s an impressive record for such a short period of time.

Market shares in Dublin are a very different story. Its dominated by RTE1 at 33% and its closest rival in share is FM104 only at 13%. Its means that RTE manage to get, and hold on to, listeners much longer than any of the other stations in the Dublin Market.
In the chart below, there was no (“artistic”) choice but to limit the scale and by doing so denying RTE1 their premier position. But in order to show the fight going on below them, we have no choice but to drop their figures which are 33% should you ask. 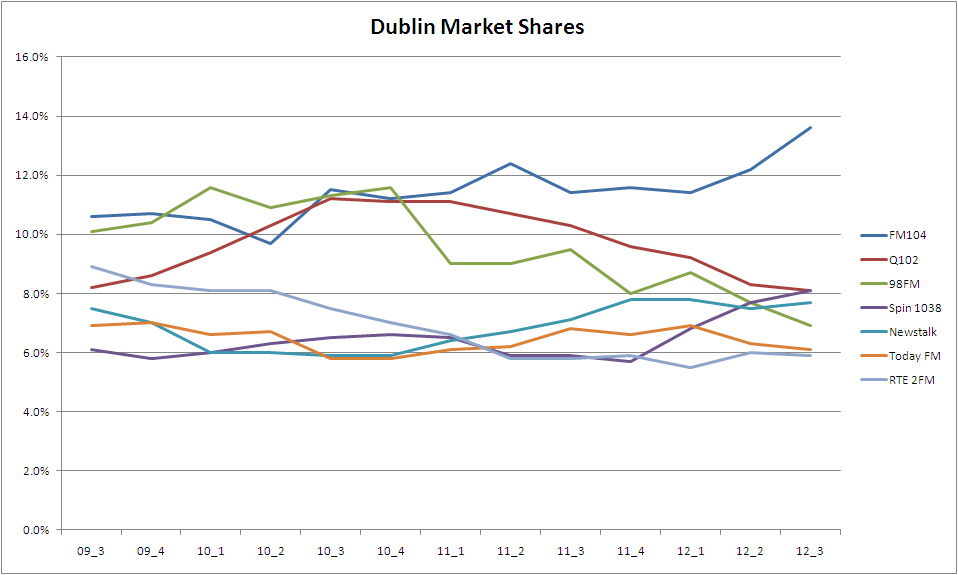 Finally another chat! You can see where it all happens – or doesn’t – in the capital. FM104 starts off with a really big breakfast which seems to carry it throughout the day. This graph shows how deceptive an overall figure can be. Look at Q102 which is second for a very large part of the day but still only manages to rank 6th in reach in the Dublin Market.