World and Herald Editorial to merge

Interesting developments in IN&M where they have decided to combine the newsrooms of The Herald and Sunday World into a seven day operation “with a focus on news investigations, top quality sports journalism and entertainment”.

This new setup will report to a “tabloid platform” editor who will be responsible for both the print and digital formats of both titles. The print and digital formats will retain their separate brand identities but their backroom operations will be merged and, interestingly, the titles are “likely to have its own editor under the new arrangement” – so no guarantees there.

There’s no mention of the Daily Star in this arrangement and a notable omission I believe. It’s not that long back where there were rumors of the Daily Star and Sunday World editorial being merged which on the face of it would seem a better fit. 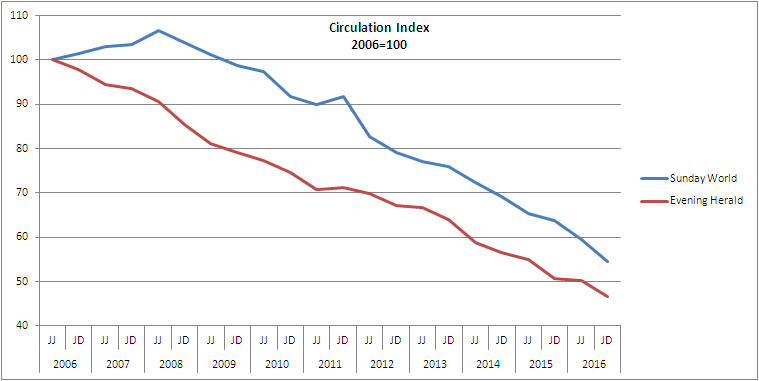 The Daily Star’s position in the group seems to be very murky after the spat with Desmond over Royal nudity pics. IN&M still own 50% but, on the face of things, seems to have lost interest. IN&M received a dividend of €500,000 (excluding and charge they have for prepress, printing and what goes to Newspread in terms of distribution) last year from the operation but is it worth all that hassle for those numbers?

Whereas the other two titles are getting the full metal jacket in terms of digital support, the stepson (D.S) is nowhere to be seen with a non-existent digital presence at the moment.

Does all this add up to an Eirexit in the distant future for the Daily Star.

And finally…. The Irish times in reporting this went out of its way to dust off the certificate for The Herald so that it could inform the readers that its “circulation at the full cover price was 35,076 between July and December of last year “.

Naturally, the full cover price number is lower than the certificate number of 40,847 when bulks are taken into account.

I haven’t seen the Irish Times reporting their own “circulation at the full cover price” of 58,554 so far this year in their own publication!