The Sunday Market headline has to be dominated by the 14% decline in circulation of The Sunday World dropping 34,000 to 217,000. While there are, on the surface, grater declines for all the tabloids in the market, that can be easily explained away by the closing of the NoW and the opening of The Sun (Sunday). Granted they are real declines in the order of 40% for those papers but it’s like an explainable ‘act of god’ in circulation terms so I’m going to try and look past it at this juncture.

The Sunday Independent is now the dominant paper in the Sunday market with a decent 20,000 lead on its nearest rival. Although it’s not without its own troubles loosing 13,000 or 5% on the year. The Sunday Business Post dropping 9% to 39,000 would be a concern for TCH. Coupled with a 6% decline in the Irish Examiners numbers it has to be putting a strain on the company’s bottom line.

The Mail on Sunday was down 4% to 109,000 one of the ‘better’ performers in the Sunday Market.  The Sunday Times just managed to stay on the right side of the six digits at 100,720 but dropped 9% on the year all the same. 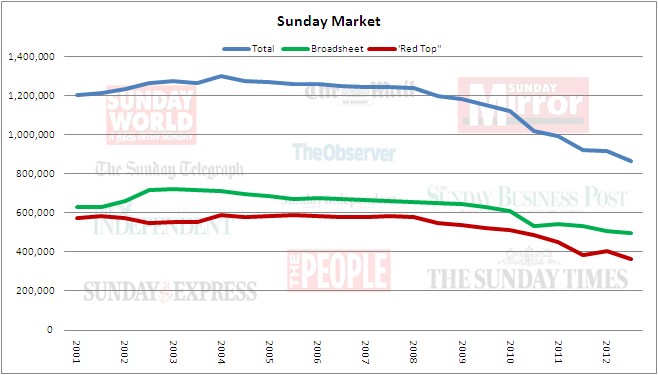 The tabloids numbers deceive the market as the comparisons are, valid, but very off-putting. The Sun (Sunday) sells 64,000 copies every Sabbath and these purchases had to come from either new purchasers in the market (stop sniggering) or from other newspapers – which is the case. All of its tabloid stable mates gave up in-or-around 40% of their purchasers on the back of the Sunday Sun entry into the market.

Bulks took no part in the propping up any of the newspaper numbers – no more than they did last year. Again, the graphic below is a bit of a mess but does wrap up the trends fairly well .