The Sun dipped behind a paywall on 1st August and its first audited figures for that month would normally be available today – but they pulled a fast one and withdrew from the ABC e-audit seemingly.

Prior to going behind the paywall, The Sun’s website had average daily uniques of 1.8m, with an average of just below eight page view per visitor.  The Mirror on the other hand was always about 30% behind The Sun numbers coming in at 1.4m unique per day pre-paywall.

It’s interesting to note that about 40% of the visitors to the Mirror sites are “mobile” – The Sun didn’t break out that figure. The Mirror has put a lot of effort in the last year into their mobile offering and it looks to be paying off.

And just for clarity: according to the ABC, a Mobile Page Impression is one that is “delivered in a format optimised for use on a smartphone or similarly capable handheld device”

Data from the latest audit in August shows the Mirror site traffic increased by 20% on the previous month, obviously driven by the Sun blocking content.

Now, call me cynical, but I think 20% is on the low side and I wouldn’t think there would be that much rejoicing in the Mirror Group in a 20% uplift. The Press Gazette today uses “surges” to describe the Mirror’s uplift, an adjective I prefer to keep on ice for the really big occasions.

While the data is there, it’s interesting to note the spikes marked on the graph which drew higher than average visitors for those days.

B)      2.7m for The Mirror with exclusives pictures of Nigella Lawson’s incident at a London Restaurant.

C)      Mainly in favour of The Sun at 2.7m who cleverly renamed their title “The Son” for the day – Kate and William’s first child.

D)     Uncontested for The Mirror , but a front page of Cameron’s threatening to bomb Syria

From those spikes you can draw your own conclusions as to the appetite of the tabloid web lurker. 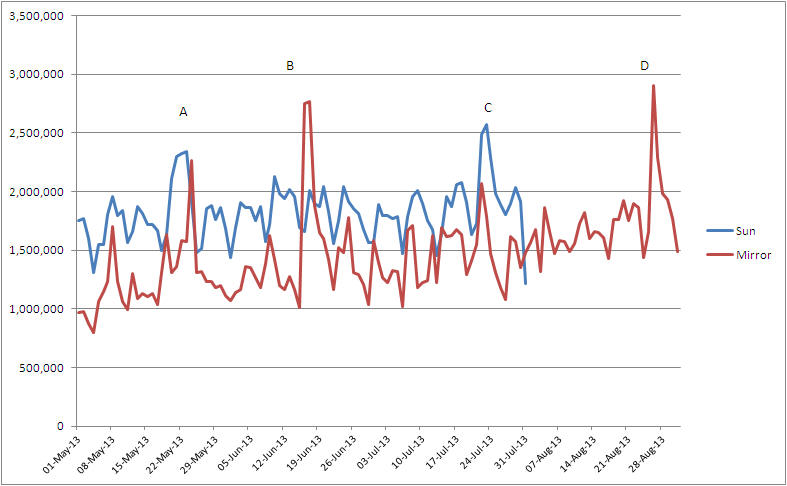