The biggest faller in percentage terms was the Daily Star dropping 13% or just over 10,000 copies. This is followed by The Sun, down 8% and the Irish Times back 8%.

There doesn’t seem to have been any sleight of hand magic in the respective circulation departments as the bulks stayed relatively stable year on year – the Independent maintaining 12% bulks and the Irish Times 8%. Bulks are a very legitimate and, at times, necessary marketing ploy used by newspapers – but there’s a point where the levels of bulks are so high that it begins to discredit the topline figure. It’s not for me to moralise as to where that line is crossed, suffice to say that some, in my opinion, are coming very close.

Just like the lad in the ad, both their marketing and circulation departments haven’t quiet worked out ‘the story of why’ either. One thing’s for certain, at those rates of decline, somebody better figure it out soon. The Examiner just edged into the 30’s dropping 6%or 2,500 copies year on year.

The Mail made a modest increase of 1%, but on the back of the bloodshed that is the newspaper market, that has to be applauded. 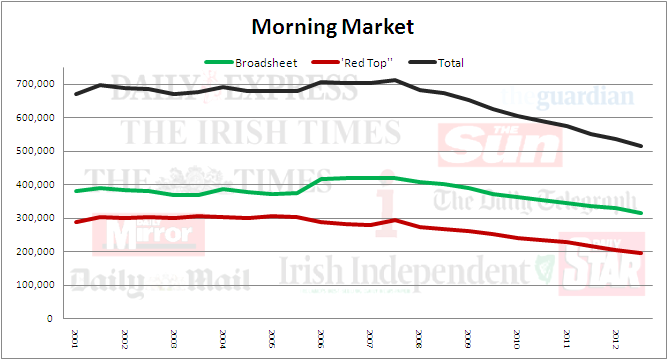 The Tabloids didn’t have a good six months dropping 9% collectively and one of them having a particularly bad time of it. The worst performing paper in the Morning market (bar the papers sub 5,000 copies), The Daily Star, was hit with Kate-Gate and its subsequent fallout. On the back of the decision to ‘print and be dammed’ the Daily Star editor departed soon after and the wheelhouse was left empty for an inordinate amount of time until the old editor took control again.

The papers day-to-day running (but not the shareholding) was handed over to the Indo buy the UK shareholders and it now looks as if it will function as part of the Sunday World. Its circulation is down 13% on the year to 70,000 and they still maintain a big cover price differential between the other two tabloids.

The Mirror managed only a 4% drop and The Sun dropped 8% and into the 60’s as well. The rest of the papers in your shops are small in comparison to the larger players. However it’s worth noting that the FT and the Guardian are down 19% and 12% respectively as perhaps businesses begin to tighten the purse strings.

The graphic below is a bit of an eyeful, but interesting none the less. 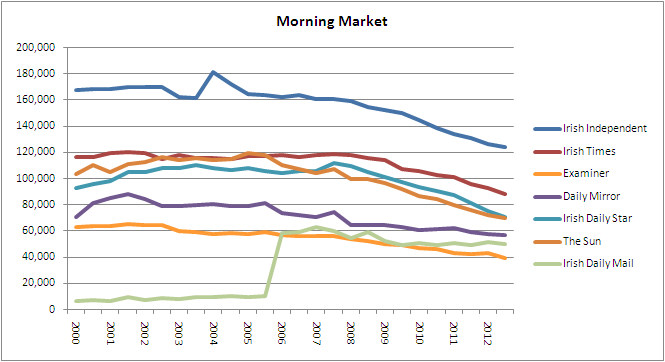