If you wnated a headlin figure for this Jan June 2011 ABC’s it would be the fact that the Sunday market slipped into six figures. It comes on the back of  the closure of the Sunday Tribune and the semi-closure (as the paper in another guise is still available) of the Daily Star on Sunday.

Actually it could be worse as the News of the World in real life is no longer around but still reported figures for those six months. But even with their final contribution the market is down 127,000 or 11%.

The Sunday Independent managed only a ‘modest’ 4% decline but is still in top slot as the largest biggest selling newspaper.

This accolade was greatly helped by the Sunday World loosing over 20,000 sales or 8% year on year.

Regretfully, not all of the papers subscribe to monthly ABC reporting so it’s impossible to see what the effect of the closure of the News of the World had on the sales of the Sunday World.

The Sunday Mirror had a decent first half in comparison to the previous year managing a 9% increase year on year. What we do know is that the Mirror was a benefactor of the NoW’s demise posting an ABC of 66,980 for July 2011 in comparison to 41,000 here (see what monthly reporting can do!).

The Mail on Sunday also stayed the right side of the redline and the Sunday Times was down only 1%.

The Graphs below neatly summarise the Sunday market. The first is the total market figure form 1998. The second indexes the different market segments; Tabloid, Non-Tabloid* and Total Market back to 1998. You can see clearly that the non-tabloids feasted off the Celtic Tiger in the Sunday market. 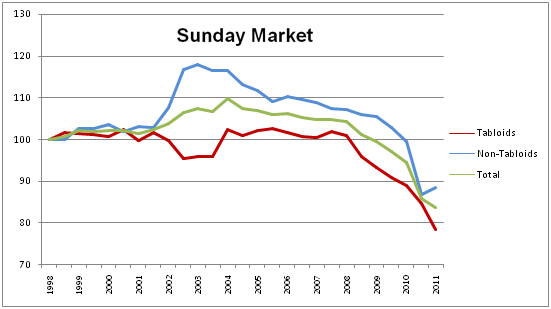 *Non-tabloid: it’s such a tragic way to group papers! Some of the papers in the ‘non’ group are actually tabloids as the word describes it a newspaper measurement or dimension. However, the term was hijacked by the media and is now used to describe a particular genre of paper.