Outside the headline figure of a 31% drop for the Sun on Sunday compared to the News of the World, the big story would be the 14% drop in the circulation of the Sunday Business Post.  In the last twelve months it lost nearly 7,000 copies and dropped to just above 41,000. Luckily for the spin in the sales department, there are 1,400 copies (3.5%) of ‘bulks’ in that figure – but they’re not alone in fattening their figures.

Next on the list is the Sunday World which is down 8% or close to 20,000 on the previous twelve months. Given that they ply their trade in the Sunday tabloid market it’s a rather remarkable figure. The comparative figure shows 115k for the News of the world, which, a month after publishing that, hastily ceased publication.

We can all wear, with a kind-of mock pride, the ‘800 years’ badge on our sleeve (or 770 years and 30 years of Corrie, if you are that way inclined). I’ve always maintained that there is a cohort of Sunday buyers that are closet ‘royalists’. They don’t want an Irish paper on a Sunday, they want an English tabloid and all its trappings.This left a void for seven months until it reincarnated as the Sunday Sun. But in that intervening period the Sunday World does not seem to have been able to make any headway into the NotW 115k purchasers. Given that the other players in the Sunday tabloid market gained, or at worst stayed relatively steady, it speaks volumes for the old NotW purchasers.

And when the NotW closed and they scrambled for another paper, they roundly rejected the advances of the Sunday World and instead fell into the arms of the various painted ladies from across the pond.  The Sunday World was the only paper in the Sunday Tabloid Market not to make some gains in tumultuous period of the NotW closure.

The Sunday Independent maintained its status as the biggest selling paper, but still shed 7% or 17,000 copies. Given that 4% (10,069) is cosmetics from the bulks department, it could have been worse. It’s worth noting that their absolute bulk figure is down on the 2011 figure.

The other papers that produce monthly figures are well covered here, so we won’t go over too much old ground. The bigger players have mixed fortunes.  Sunday Mirror is up 8% and The People 2% and Daily Star on Sunday down 2%. The gains would be on the back of the seven month absence of a second paper from News International. The Sunday Times and Mail on Sunday dipped 6% and 5% respectively and the rest of the papers are small in number to really bother the keyboard. 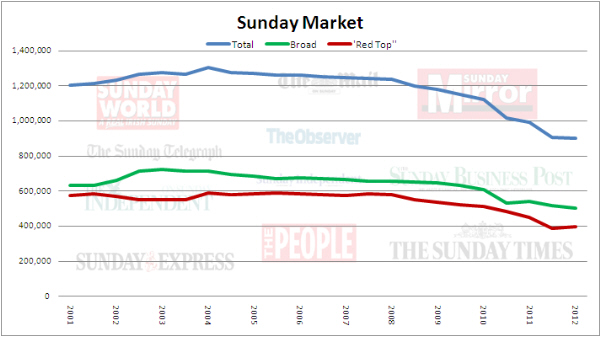