Probably the bellwether statistic of recent times is the rate of decline in circulation year on year. The Island of Ireland Report July-Dec 2016 shows that in the latter half of 2016 the Sunday and morning markets have reversed any small gains they had made in the last few years.

You can clearly see from the graphic below that, whilst not setting the world alight, the most recent few reports show the market moving somewhat in the right direction and that the rate of decline was ‘improving’ or static at best. This report indicates that the market has fallen in 2016 and the rate of decline is back to where it was around 2012. 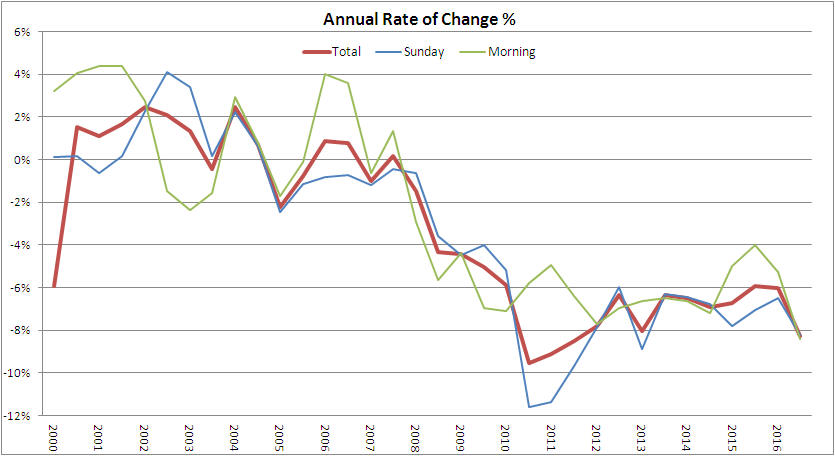 Significantly the market leader, the Irish Independent, dropped below the 100,000 level for the first time. Their circulation for the latter half of 2016 was 97,100, down 11,300 on the same period last year and a fall of 10.5%. This was even after their actively purchased moved from 84.4% to 82.7%, suggesting that they had a higher proportion of multiple copy sales in 2016 than the previous year but still didn’t keep them above the 100,000 watermark. 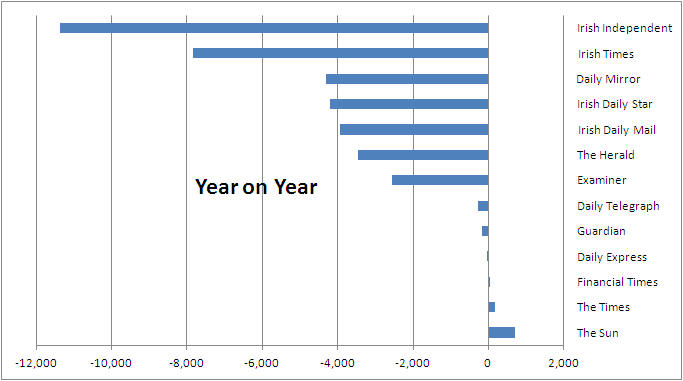 The Irish Times circulation came in at 66,200 a drop of 7,800 or 10.6% on the previous year. They will, in their analysis later today, be at pains to point out that their digital subscriptions are up from 7,500 to 13,100 which has to be applauded. But, when you gain 5,600 digital subscribers and lose 7,800 in print sales –  it’s not the idyllic scenario.  Likewise, the paper had its finger in the multiples pie, but it was an improvement on the previous year with their multiple purchased figure going from 13% to 11%.

There’s something to be said about the number for the Irish Examiner. Admittedly they are back 7.8% but the paper still did better (not dropping as much!) in comparison to its nearest rivals. They have covered many of the recent controversies with great gusto and at this point, Michael Clifford is no stranger to the make-up departments of many of the Irish television stations. Rather than aping other online publications they have, in many instances, created the news – is this the panacea the market is looking for – a return to a bit of digging and delving?

Collectively the tabloids were down 5% rescued mainly by The Sun who managed a small increase in circulation of 700 copies (1.2%). This modest increase was in part due to a price promotion in July (and June, but that falls into a different report) when to paper was ‘half price’ or €0.50. In 2016 the title also flirted a little with multiple copy sales, a tool they had not used in previous years.
Relative to other publishers their use of multiples was very tame, at best adding just shy of 1,000 (2%) to their six-month figure.

The Daily Star was down to 51,200, although their last monthly figure for December show them dropping below the fifty thousand mark to 49,200. It was an 8% decline on the last six months of 2015 but relative to 2012 when  they were dropping around 13% each report, it’s a bit of a respite.

The Business post managed to beat the average declining only by 5.2%. Their circulation was 30,500 down 1,662 o the previous year with 95% of their circulation actively purchased.

The collective circulation of the tabloids (inc Sunday World) is down 10% – but that’s a very deceptive figure. The Daily Star is up 20% on July-Dec 2015 mainly down to taking their eye of the Irish Market late in 2015. Late that year their figure dropped from about 15,000 to about 8,00 for October and December. There was no explanation for the drop and their resumed normal service in January 2016. This accounts for the 20% “increase” seen here.

Like its Daily sibling, the Sun on Sunday made good during the Euros with their half price promotion and added about 16% with the €0.50 price reduction (a price elasticity of -.219 for the very curious). Coupled with a few multiples not used before, their sale was up 400 copies on the comparable period in 2015.

The Sunday Times, although down 1.5%, still managed a smaller fall than the market as a whole. Their gains were helped by News UK’s change of heart regarding multiples and the Sunday Times’ last few ABC certs for 2016 would have them on about 92% actively purchased which was not the case in 2015. As I’ve mentioned here on many occasions, there’s nothing wrong with multiples and they are a legitimate promotion tool in the eyes of the auditor, the ABC. But there no point in drawing a comparison when that comparison is skewed by a promotion.