The Morning tabloids showed a rise in circulation, mainly due to the strength of the Mirror, although The Sun and Star had small increases as well. Surprisingly, there was only one faller month on month – the Daily Mail. This is counter balanced by the fact that there were only two papers to show and increase year on year.

The tabloids are down over 30,000 in the past twelve months and the total morning market is down 34,000 in the year.

The Sunday Sun continues to disappoint on the sales front dropping 5,600 on the month. It’s really not looking good for the publication which has been met with a very luke warm reception. Nobody could ever defend the actions of its previous incarnation, but has the group lost its edge after the hammering it took over the phone “hacking”. 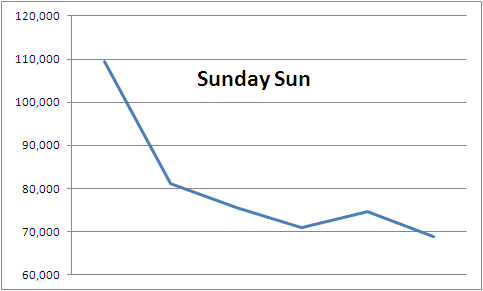 The Sunday Sun has made no real effort to distinguish itself from the Daily – not to level of difference that existed between The Sun and the NoW. Murdock did say from the outset that it was going to be a ‘seven day publication’, which, from the sales, is not going down too well witht eh buying public. Its total circulation is now 2.1m copies every Sunday, which is still a staggering figure, but that’s down from 2.5m in March and 3.2 on its launch edition.

You could sit and type thousands of pages on the underhand way that paper went about gathering stories – but it got some fantastic stories without (supposedly) the use of hacking: the off field antics of Rooney, fake oil sheiks, entrapped royalty looking for bungs and ‘bent’ cricketers fixing matches to mention a few. In comparison, the Sunday Sun has, well to be blunt – no balls!

The Sunday Mirror also fell over 2,000 in comparison to June. The Mail on Sunday also dropped 2,500 and the Independent has been withdrawn from the Irish market completely although it still maintains the distribution of the ‘I’.

The Sunday Times still haven’t climbed over the 100,000 wall falling just over one hundred short of adding another digit to their circulation this month. The Sunday market is down over 5,000 on the month and over 25,000 on the year.