As a group, the tabloids are the real sufferers in the morning market accounting for over half of the drop in circulations. They have also dropped market share to 39%, their lowest share since 1998 – their highest being 45% circa 2005.

The graph at the bottom shows that, collectively, the tabloids dipped disproportionally in comparison to the market as a whole. Aside from a small uplift in 2007, the tabloids have been in decline since 2005. Maybe we didn’t need Nouriel Roubini (Doctor No) to predict the beginning of the end, we should have just kept out eye on the tabloid market instead.. 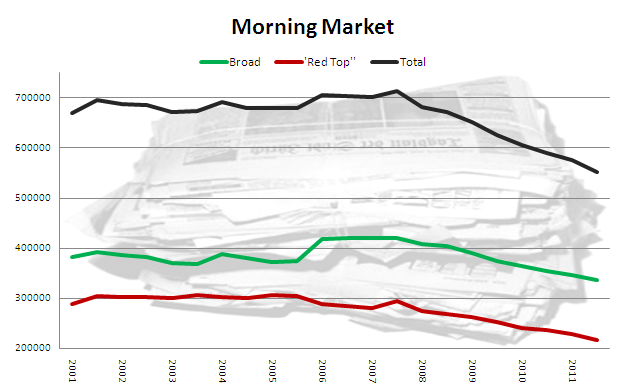 The Daily Mail is one of the only papers in neutral/positive territory managing to drop only 47 copies on the same period last year. The Irish Times Marking department will have to get cleaver in trying to negotiate the elephant in the room that is their fall below 100,000 copies per day. It’s been 1996, or fifteen years, since they visited that parish and I will take some copywriting skills to avoid that topic. The Examiner, contrary to the readership figures last week, declined by 9% to 42,000. 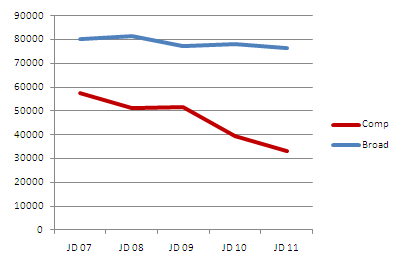 Leaving aside the ‘Irish Independent International Edition’ the mix between broadsheet and compact is now 70/30 in favour of the Compact*.

Add to this that the sales of the broadsheet version declined by 16% compared to 2% for the compact, you can only guess where this argument is going.

However, the broadsheet still has and army of 33,000 loyal purchasers and it would be foolish to think that they, in the absence of the broadsheet version – should that decision ever be made-, would all migrate en masse and happily to the compact edition.
*these are newstrade figures only, no bulks or ‘light’ editions.