Some interesting developments in Scotland that have some interest for us here as well. The Scottish Sun, which is similar to The Irish Sun in that it’s a sanitised version of the ‘main’ paper taking into account the different pallets of the various regions, has landed itself in hot water with many section of Scottish society and beyond.

If you’re not a follower of the round ball (foreign game style naturally) in Scotland some background: Glasgow Rangers, one of the oldest and largest clubs in Scotland, was placed in administration this year and on the back of that, they now ply their trade in the Scottish third division. There are many reasons that the club was placed in administration in the first place one of them was due to a massive tax bill being demanded from the club by the UK authorities.

The clubs financial affairs have been closely watched for the past four years by journalist and author Phil Mac Giolla Bhain and he has just penned a book on the saga called ‘Downfall: How Rangers FC Self-dectructed’ which was released this week. It’s a big story in Scotland (well Glasgow) and would be of interest to many individuals.

As part of the launch publicity, the Scottish Sun had an agreement to publish a serialisation of the book, which was due to begin on Monday.

The paper weighed in with a big splash for the book in the Sun on Sunday (Scot edition) calling it “one of the biggest stories in Scottish football history” – see tomorrows Scottish Sun etc etc.

On seeing there was going to be a book about the downfall of their beloved club, printed in the Scottish Sun some Rangers ‘fans’ began to contact the paper saying (amongst other things!) they were appalled that the Sun would allow themselves to be associated with a sectarian – and pointing to  a blog that Mac Giolla Bhain had written in April as evidence of his bigotry – you can read that here  and make up your own mind.

Come Monday, the Scottish Sun does three things – they pull the serialisation completely. They justify this action in an Editorial saying that  “Phil Mac Giolla Bhain is not one of our journalists and his blog undermines the entire industry” – thus they spiked the story. Furthermore they subsequently remove that editorial on their sea change of views (on “the biggest stories in Scottish football history”) from the web so that the fallout can only be seen in Scotland – in print.

And furthermore: I now believe that they have removed an interview the conducted with Phil Mac Giolla Bhain in April from their site!

Many have weighed in: Roy Greenslade took up the challenge and supported the book and the right for the facts to be heard. Another great article is by Scotish Lawyer Paul McConville in an article entitled “Playing the Man and Not the Ball” – The Sun, Rangers and Downfall by Phil Mac Giolla Bhain” argues that the Editor used a article written but the author (a highly satirical one) as an excuse to drop the serialisation because for pressure. Pressure from football supporters is something that The Sun are used to!

They know all too well the power of the disgruntled supporter(s) – and it’s possibly for that reason they decided to backtrack on this occasion. They are never allowed forget their costly mistake in ’96 and still pay for it through a continuing boycott of the paper some retail outlets across Merseyside. 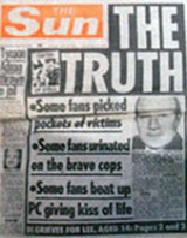 What “undermines the entire industry” is phone hacking and jeopardising thousands of jobs in the print industry. No giving the reasons why a club went to the wall does not. Playing the Man and not the ball is cowardice.