Just to recap – there are two distinct ABC reports – a monthly report, in which twelve morning newspapers available in Ireland subscribe to and equally twelve of the Sunday’s provide data for. Three mornings and three Sundays only provide data on a six monthly basis to complete the lofty sounding ‘Island of Ireland’ report, a report which is given acres of space in print and way too much weight – and I stand guilty as accused on that front.

The monthly data correlates very highly with the overall market and should be given equal provenance. However, the argument would be that if you are part of the 49% of the morning market and 40% of the Sunday that slovenly produces data on a half yearly basis, why give prominence to titles that produce timely monthly data?Anyway..

In general the morning tabloids were down collectively over 6,000 copies in September a month were there should have been a few spoils of the sporting wars – a Hurling final replay and a football final should have brought in a few sales. You can see from the chart below that all the tabloids gained in August (Premier League kick-off) but failed to keep most of those gains. 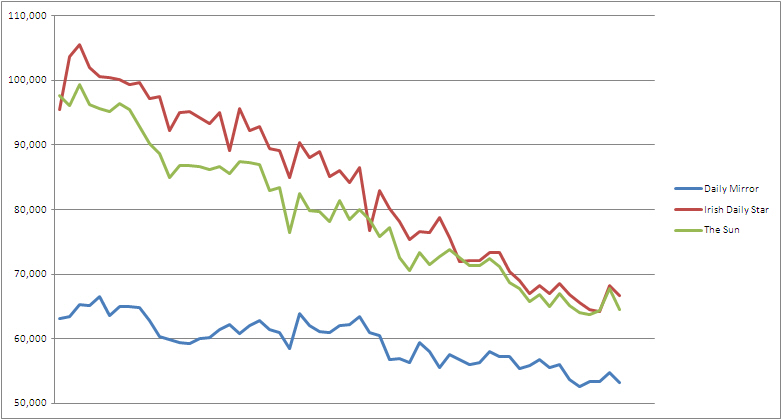 If the market as a whole is taking a beating, then the tabloids are taking a pasting. Falling faster than the rest of the market there seem no end to their decline. Unlike some of the other titles, tabloids can’t really rely on their readers turning to a digital offering as survey after survey has shown that tabloids readers don’t convert well to digital at all.

On a positive note Associated Newspaper had a 2,000 increase in their Morning title and over 4,000 in the Sunday edition. Maybe the Sunday Times should be looking there for a few of their lost sales.

Year on year the market (those reporting monthly) is down over 50,000 copies (conservatively over €7m at the till for these papers alone). Monthly they are down just over 10,000 copies.