Numbers for October arrived and it’s interesting to note that if you look at where some of the publications were pre-COVID-19 there are definite signs that the pandemic is having a real effect on some papers.

The Daily and Sunday Express are down substantially on their numbers in February. My own personal take on this is that both papers have a particular place in ‘middle-England’ which, without being ageist, does have a much older demographic. That cohort would be the group most encumbered by some of the recent restrictions. They would be higher risk group and because of this, maybe the group adhering strictly to the rules and restricting their movements – which could, in turn, be affecting the Express group sales.

The FT is another prime example of what the disruption in society and the working day can do for sales. Many previous FT readers are now working from home and their ‘paper of choice’, which miraculously appeared on their desks every morning in the City, is no longer readily, and freely, available.

A body of them, now facing having to fund that purchase themselves, have decided against that. Wrestling between buying the FT daily or having a mocha frappe magical unicorn latte with soy milk while walking the dog – the kit-kat and the canine wins out for many. So much for brand loyalty!

Anyway, here they are:

Interestingly, looking at the year month on month you can see a distinct drop in April, a 10% drop month on month. But from there the sales of the papers under the microscope stayed fairly stable. If we re-base both years with January being ‘100’ you can see that the rate of decline 2019 was greater than it has been, so far, in 2020. 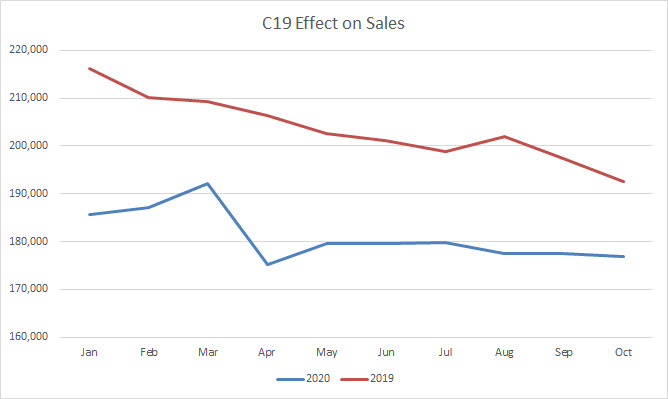 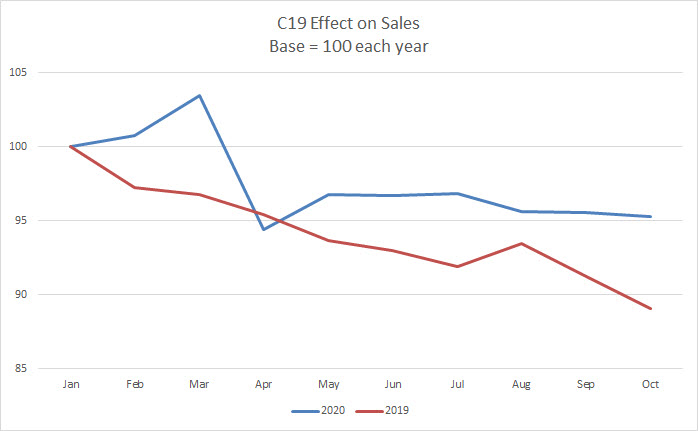