Some of the great theories in economics (and finance) are predicated on caveats that allow the theory to be conclusive, but in reality would not necessarily be the case. Take for example the theory of the Capital Assets Pricing Model (if you haven’t heard of it you can thank yourself lucky). One of the pillars of the original theory is that all “players” in the market share the same information! Yes, indeed.

Some of the information below might point to a potential lifesaver for the newspaper industry, but the one thing to keep in mind is a payment model. I read a newspaper at €1.90 per day is a completely different mindset and loyalty to I read a newspaper, free online.

But with emerging technologies and content delivery in a fashion that people want, not just in the way that content is delivered given the constraints of code and browsers, would people be prepared to pay for content? If so what is their price point? They have a value on a physical product what’s their value for the same digital product?  Its most likely the price they are charged now – free!

There are three routes a publisher can go down: Hard paywall – subscription needed; Metered paywall – 10 free articles accessed a month before you need a subscription and finally freemium paywall where certain section are free and others are subscription only.

The original ‘smartphone’ adopted 3G and WIFI and therefore allowed media owners to have their publications viewed on a device other than a PC. In order to do that with a bit of structure they had to adapt their publications to the all pervasive APP. And it looked at one point that the web would still exist but only to be viewed through some sort of APP.

It was only back in April 2010 that the iPad was first introduced and it made the publishing industry sit up and think. The products size with a 9.7” diagonal screen (an A4 page is 11.7” diagonal) and the particularly tactile nature of its use it had many similarities to the relationships to interacting with magazines and/or newspapers.

Some news organisations saw that this could well be the way forward and many stick rigidly to their Gutenberg press principals. So, now that nearly three years have passed, it worth taking a look at how the interweb population has adopted to these products with an array of stats. The statistics come from a variety of sources and there’s not one absolutely definitive statistic on the number of tablets accessing the net.

The core of these come from ComReg who measure the number of active SIMs in Ireland and the number of these that would be smartphones/tablets (they make no distinction between either).

ComReg estimate that there are 5.5 SIMs in the Republic with 42% or these being considered smartphones/Tablets (they would be counting tablets with a SIM card). So you could extrapolate out and estimate that the smartphone share would come close to 45% and bring their numbers to 2.5 million units.

But the tablets are far from SIM dependent and wouldn’t all be caught in the above numbers anyway.

RedC, the research company here, estimate smartphone penetration is 46% (as of Jan 2013) in 2012, so could we reasonably estimate that this will be 48/9% by the end of 2013? In an interview on Sky with Comet CEO in January, he put the growth in sales for his stores over Christmas squarely down to shifting tablets. Furthermore he said that at one point they were selling three tablets a second in store across Britain and Ireland.  The same RedC research put Tablet penetration at 23% here in Ireland in 2013 (and again they are not in the main 3G devices). Tablet pricing is dropping rapidly for non OS products and this will have to drive further growth over 2103.

Google through their Thing Insights has the penetrations of Smartphones and Tables across Europe. They estimate that Smartphone penetration at 43% and tablet at 10%. The field work for that data was Jan/Feb 2012 – so we can expect a rise in tablet ownership since then. 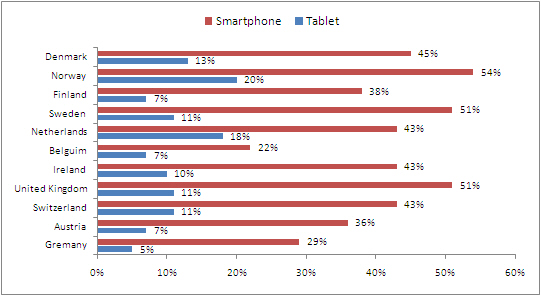 In research conducted by ComScore they estimated that two out of every five tablet owners in the US have accessed news on their device and one in ten do so on a daily basis.