Some good news for Newspapers

There was some good news from the USA on a potential ray of hope for the newspaper and magazine business. The research was conducted but the measurement company ComScore and it looked at the readership of newspapers by tablet owners.   It found thet just over one in ten tablet owners read a newspaper on […] 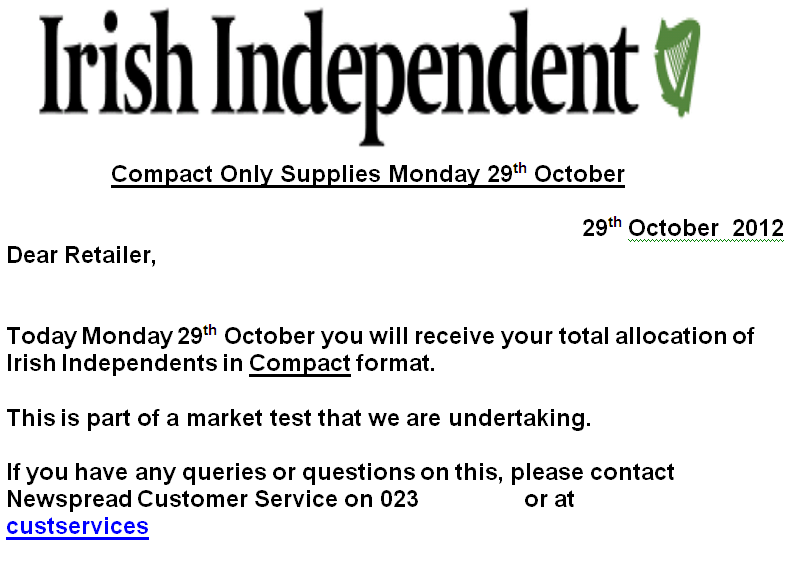 I alluded to this on a couple of occasions before in this pixelated version of reality. Running two editions of a newspaper – one broadsheet and one compact, is a risk free but expensive decision. On one hand you let the market decide which format they prefer by giving them the choice of both formats […]

A slight word of caution before looking at these figures. In comparing this year to last, it has to be remembered that the sample size of the survey increased to reflect our changing population. In the 2011-3 survey, the estimated universe was 3.511m whereas the estimated universe in the latest survey (2012-3) is 3.608m and […]

The overall figures for any station will only reflect the individual programmes they broadcast. Throughout the day stations will have different audience levels depending on what the population is doing and for some stations what the competition is at. As you can see for the chart below that looks at all adults listening to all […]

There is always a big analysis (outside these four walls) on the individual programmes in the schedule and who’s doing what. The analysis is based on absolute numbers and, therefore, the comparison to last year might be thrown due to the change in the universe. In each analysis it comes down to who has the […]

If the national picture is more or less static, then at least the Dublin figures adds a tinge of excitement into the mix. With thirteen stations vying for position, the competition is fairly intense. Like the national figures it’s dominated by RTE1 with a 28% reach, but that top slot is, every quarter, being chipped […]

Finally, a take on the demographics of the national listening. Below is a chart which looked at the demographics in a slightly different way. There’s enough analysis of the figures via the radio stations to make your eyes glaze over aka “we’re the fastest growing station in Ireland and we reach 12 people”. Below are […]

Starting with the tabloids as it, historically, is a decent month for them. But not for all of them as The Sun took a hit of some 1,100 month on month. The Mirror was down 800 and the Daily Star just maintained the previous months figure.  Perhaps this was due in part to the finals […]

ABC Complaints in the people’s republic

Nothing beats a bit of decent competition. It ups the ante for all concerned. The salient part of the first sentence was the word “decent”. We’re not asking for strict Queensbury rules here, actually we’ve always advocated a more “Dan Donnelly” approach to the pugilist’s art. With obviously not enough on their plates (like declining […]

To App or not to App

A particularly interesting bit of research for the USA on the adoption of pads/smartphones and how they help to deliver news to their owners. The research shows that with the introduction of cheaper tablets and smartphones in 2011, this has lead to a huge increase in the number of Americans accessing the web through these […]