It’s the sixth successive fall in the Dublin market with no sign of a letup. The graphic below gives a good visual representation of what’s been happening over the past few books.

Like the national scene, the market is dominated by RTE1 with a 28% reach and 299,000 listeners every day. That’s down 2% on the previous year and up marginally on the last book.

Today have struggled in the metropolis and are now reaching 70,000 which is down 20,000 (22%) on last year and they are stationary on the previous book.

The long term trend for Dublin listenership is downward and gained some acceleration since 15Q3.

The graphics give a good snapshot as to what’s happening over the long term. You can see above the way RTE are edging ahead whereas FM104, Newstalk and Spin had all curved downwards on the last few surveys.

At the smaller end of the market some of the movements are much more pronounced most notably Today FM, 2FM and Classic Hits.

In terms of the Dublin top 20, there’s been a bit of a coup! Marion’s crown has been toppled by Morning Ireland to take the top slot and to add insult to injury, Sean O’Rourke has just nicked the third spot from her second programme – by dropping less that her fall it has to be said. But a win is a win!

*A few of the programme time slots have changed and are therefore are not directly comparable year on year. They are comparable on a book on book basis

It’s worth looking at the absolute dominance of RTE1 in the Dublin market. Looking beyond that, the Newstalk line is interesting where it dominates the other stations in the early part of the day, until around midday, and then it falls behind FM104 and 98FM by 1:00pm. 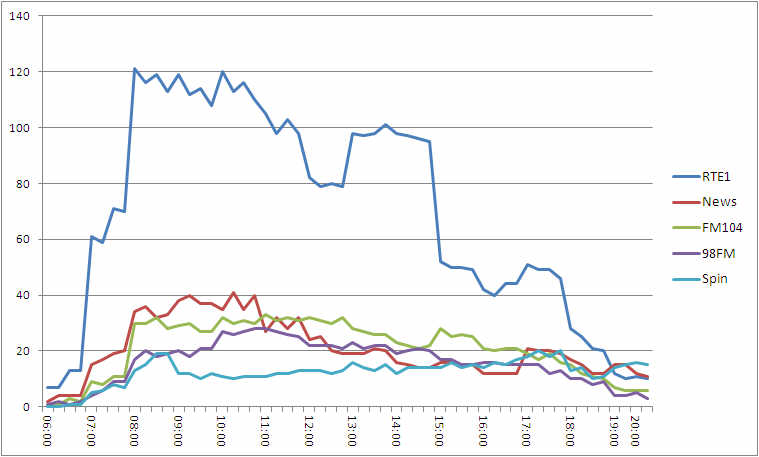