Without the fanfare that used to accompany the release of the JNRS the figures they nonetheless surfaced this morning. This book is different to previous years in the respect that it measured newspaper readership across two medium, print and online. These two figures are then combined to give a “brand footprint” – the total reach of a news brand.

Whilst it’s a welcome move on behalf of the industry and one that perhaps should have been address some years back, there are some particularly irksome aspects to the survey.

Although the various stakeholders in the survey go to great lengths to hammer home that this is a new survey and that these figures cannot be compared to previous surveys. However the survey splits readership into the print editions and the online editions of each title separately and therefore anyone curious will naturally make the comparison to past surveys. This survey would have us believe that readership of the print edition is on the up, and has been for many years now, for the morning titles anyway. 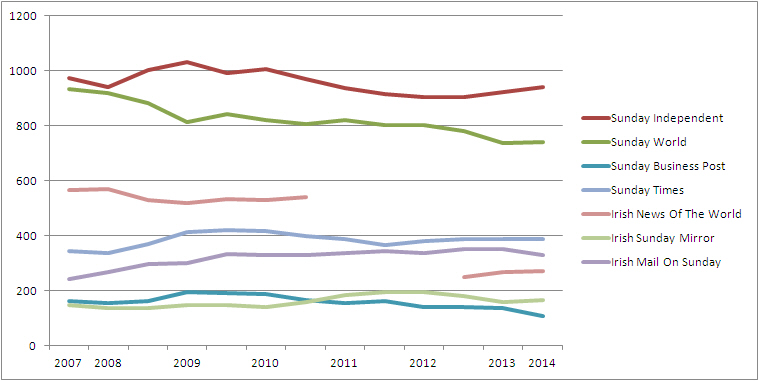 Now, without putting to fine a point on it – I find the numbers incredulous. The last five years have possibly been the worst in many newspapers history in terms of the rate of declining sales. However we are being told by this survey, and a few of its predecessors, that whilst copy sales are tanking, newspaper readership is thriving.

To highlight this anomaly I’ve taken two papers, the Irish Independent and the Irish Times and plotted, by way of indexing, their circulation and readership over seven years starting and the end of the Celtic Tiger and finishing this year.

I won’t comment or add to the graph below because it says visually what would take me way too long to put into words. But it suggests to me that there are fundamental problems somewhere when two sets of data, based on the same products, can be that much at odds with each other. It would also suggest that the Irish independent in 2007 had 3.2 readers per copy and they now have 4.7 and the Times had 2.6 readers per copy and now have 4 – make of that what you will. 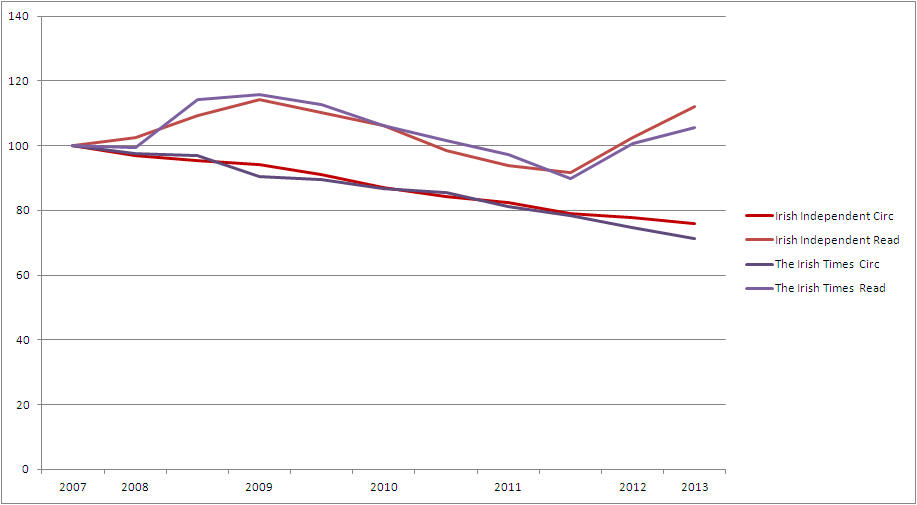 Overall the research shows that newspapers (in print) reach 62% of the population on a daily basis and 60% reach on a Sunday. 450,000 people read a paper online every day or 10% of the population and that 55% of those reading online also read the paper in print the same day.

The data the survey shows that the Sunday Independent is Ireland’s best read news brand (I struggle to find a better word!) and has a combined readership of 938,000 per day. This is followed by the Sunday World with a combined readership of 785,000. However behind those figures for the Sundays are two completely different stories. The contributions from the web for both titles are very different: The Sunday Independent web readers (71,000) add 7% to the total whereas the web contributes 1.5% to the World.

The Irish Independent is the best read daily with 649,000 readers followed by the Irish Times with 390,000. Again there is a marked difference in the webs contribution to the overall figure in both titles.

The figures here are similar to figures from the NRS figures in the UK (published yesterday) which show that tabloids don’t really make it on the web in comparison to their print reach. The best performing morning tabloid, The Sun, only manages 14,000 readers and considering it did post its Irish edition on its site it’s a pretty poor figure. Back in June, the Irish Mirror editor John Kierans told the Press Gazette that he wanted the irishmirror.ie to have half a million unique visitors per month. On the figures above, there’s a bit of work to be done. And to give it some credit, it is a very decent site and one that should perform better.

The Irish Independent has the biggest web reach at 119,000 followed by the Irish Times at 106,000. Only the people with access to their analytics in the respective papers will be able to testify as to the accuracy of those estimates. It leads me on to another point: surveys are sometimes subjective where web analytics are not. Why a model of combining the print readership ascertained via a face to face survey with the actual real analytics data is baffling.

The Irish Times contribution from the web is currently 30% of its overall readership of 390,000 people every day. A healthy figure to spin at any media director or brand manager. But it also shows that if you give something away for nothing, something of value that is, people will gladly take it – for nothing. It indicates, I think, that it’s time to begin to cash in on visitors and in a meaningful way. Not the race to the bottom that is CPM – that’s too Animal Farm – “all visitors are equal” – but they are not.

Interestingly the Mail and Sunday Times get very good Irish visitors numbers and provide little or direct Irish content.  The Sunday Business Post figure is 14,000 visitors per day of which about 1,500 are paying guests as are many of the Sunday Times visitors.

An interesting survey if not a perplexing one.