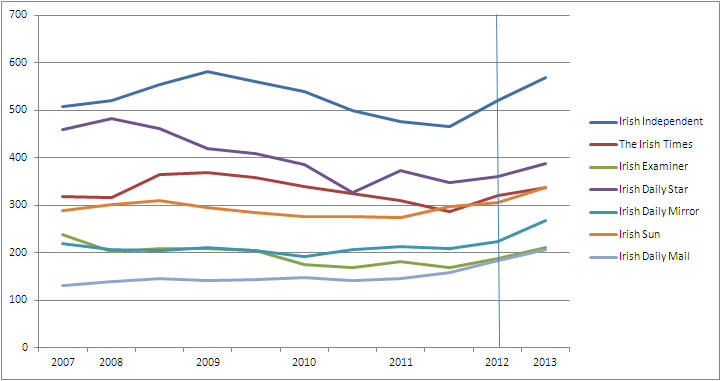 Without the fanfare that used to accompany the release of the JNRS the figures they nonetheless surfaced this morning. This book is different to previous years in the respect that it measured newspaper readership across two medium, print and online. These two figures are then combined to give a “brand footprint” – the total reach […]

The NRS, the UK equivalent to the JNRS here, was released on the 23rd August. The survey is similar to our own (now) in that it takes account of readership of a paper in both print and online. It also makes for interesting data. Looking to the future of news organisations first:  We see that […]

Stuck in the ABC data yesterday was the web data for rte.ie and interesting reading it makes. The audit is for October 2012 and we have comparative data for October 2011. The state broadcasters site is visited on average by 443,000 unique browsers (roughly equivalent to people) every day and 4.8m browsers every month. There […] 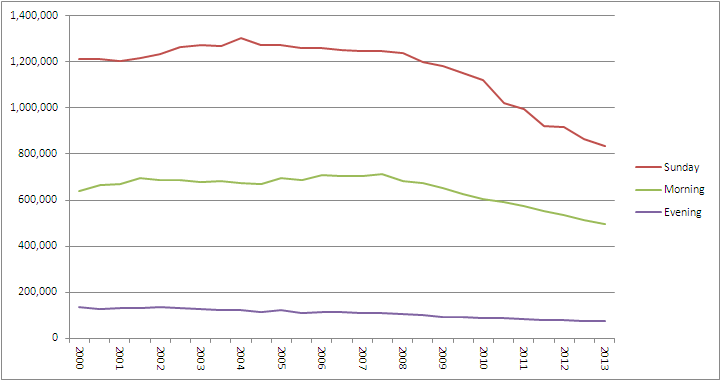 The ABC Island of Ireland report was published today finally detailing the state of the newspaper market. It shows that all of the markets declined in the past twelve months. Sundays are down 9% to 834,000, mornings down 7% to 495,000 and Evenings back 6% to 73,000.     Whereas the rate of decline had been […] 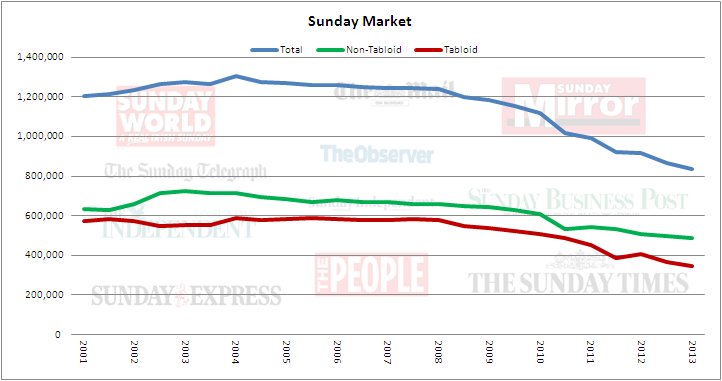 The Sunday newspaper market dropped 9% or 81,000 copies compared to Jan June 2012. Similar to the morning market the tabloids have taken the brunt of that decline having fallen about 40% since 2005 whereas the non-tabloids have dropped about half of that in the same period. The Sunday Independent remains the market leader selling […] 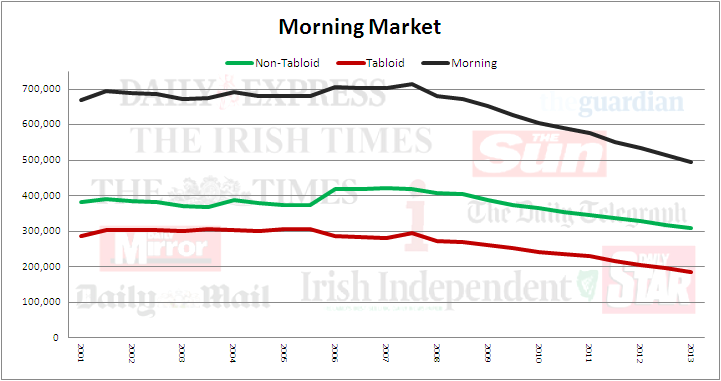 The morning market figures show declines across the board but in varying degrees. The total market is down 7%, or a few copies shy of 40,000 in comparison to the same six months in 2013. The biggest faller was The Daily Star which lost 11% (8,500) of its circulation. The Financial Times also lost 13% […] 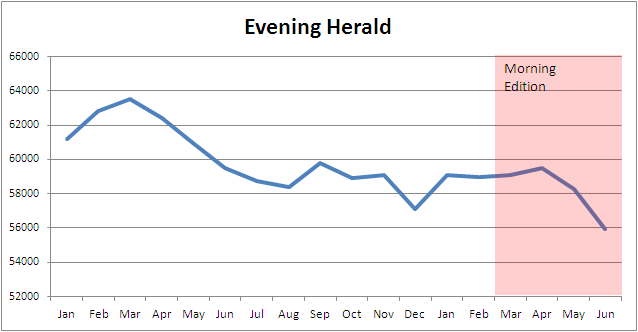 I stuck to my guns on this one and shepherded the Evening Herald into the ‘Evening Market’. I appreciate that it now appears early morning but I’d hate to break with tradition. As normal there’s little to say about the evening figures. The Echo is down 2,000 copies or 12%, close to the drop of […]

The ABC just released the Consumer Magazine Report, which details the circulation figures of some 250 magazine titles available in the UK and Ireland. Unfortunately there is no breakdown of the RoI so there’s not a huge deal if interest in the figures here in the main. Nonetheless there are some interesting points that are […]

July ABC shows some very small gains in the tabloid sector. The tabloid market is up 500 copies on the month but 18,000 down on the year. The leaderboard changed, yet again, with The Sun now in the premier position.  The Daily Mail looks, on the surface, as if it dropped inexplicably, but its simply […]

After many decades and perhaps a modicum of soul searching, The (Irish) Sun has decided to abandon Page 3 in this jurisdiction. The reason forwarded is that the editorial staff have just realised that there are “cultural differences” between the papers spiritual home and here. The decision was most likely taken to test the waters. […]